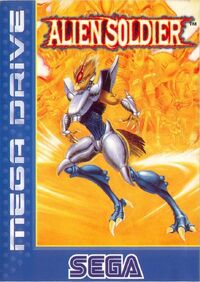 Alien Soldier is a side-scrolling run and gun video game developed by Treasure and published by Sega for the Mega Drive. Retail copies were released in Japan and PAL territories while in North America it was only available exclusively via the Sega Channelcable service. The story follows a powerful being named Epsilon-Eagle, who after being nearly killed becomes determined to avenge his near death and save his planet. The character has a variety of weapons and moves that the player must master to complete the game. Many gameplay ideas are borrowed from Treasure's earlier Mega Drive release, Gunstar Heroes (1993). However, Alien Soldier puts an emphasis on challenging boss fights with short and easy levels serving as downtime in-between.

Treasure began development on four games after the release of Gunstar Heroes, among these was Alien Soldier. Development lasted two years and was led by Hideyuki Suganami, who originally held ambitious plans and wanted to build the entire game himself. With the market for the Mega Drive quickly shrinking to make headway for the incoming 32-bit fifth generation hardware, Suganami received support from other Treasure staff and released the game with only about half of his original ideas realized. The team designed and marketed Alien Soldier explicitly for "hardcore" Mega Drive gamers, designing its difficulty and scoring methods for those that enjoyed the system's strong action game library.

Alien Soldier was released towards the end of the Mega Drive's lifecycle in February 1995. Critics praised the game for its challenge and gameplay; these sentiments carried over into retrospective reviews where critics also highlighted the game's graphics, soundtrack, and overall intensity. Some negative critique was directed towards the hard difficulty, steep learning curve, and unorthodox gameplay, but many still recommend it to fans of Gunstar Heroes and the run and gun genre. The game's first re-release was on the PlayStation 2 in Japan for the Sega Ages 2500 series which includes different regional releases and extra features. It was also re-released worldwide on the Wii Virtual Console and Steam.

Alien Soldier is a side-scrolling run and gun video game in which the player controls the main character, Epsilon-Eagle, through 25 stages and 26 bosses. The gameplay has been compared heavily to Gunstar Heroes; however, putting a much larger emphasis on boss fights, and lacking any 2-player option. The stages are notably short, populated with weak enemies to serve as downtime between the more difficult boss battles. There are two difficulties in the game, "supereasy" and "superhard". Enemies on the hard setting are only slightly more difficult; however, there are no passwords or unlimited continues as in the easy mode.

Epsilon-Eagle can run, double jump, hover in the air, and use six different types of weapons. Only four can be equipped at any given time, but the player may choose which weapons they would like to equip before the game starts. Each gun has its own ammunition bar which can be replenished; if it is depleted the player will be left with a little firepower. The player can also perform a dash across the screen, which when at full health, will become a deadly move called "Phoenix Force" that will damage any enemies in its path. There is also a counter move, that if timed properly, will change enemy bullets into health. Epsilon-Eagle can attack in either fixed-fire or free-moving styles. The first makes him immovable while firing a weapon, instead allowing for quick aiming, while the second allows walking and shooting simultaneously with the sacrifice of directional accuracy.

The premise of Alien Soldier is provided with a long text scroll at the start of the game. After the game has begun, it is not referred to again. In the year 2015, the A-Humans of A-Earth have created genetically engineered A-Humans capable of super intelligence and strength, as well as symbiotic co-existence with machinery and animals, particularly humans. A terrorist organization known as Scarlet rose up within this race and sought to dominate the rest of the A-Humans and A-Earth by locking the planet down and keeping anyone else out. During the height of Scarlet's power, an assassination attempt on the group's leader, Epsilon-Eagle, was carried out by a special forces group. Scarlet fought back with their powers, and the battle somehow breached the space-time continuum. Epsilon was gravely injured and cast somewhere into the continuum.

Seemingly gone forever, another Scarlet member known as Xi-Tiger took control of the organization. Under his rule, Scarlet became too brutal even for themselves, and they called for Epsilon to reclaim his position. More or less isolated from the rest of the group, Xi sought to find and assassinate Epsilon himself. He planned an attack on an A-Human research laboratory, where children with special abilities had been kidnapped and experimented on. Upon arriving, Xi-Tiger sensed the presence of Epsilon in one of the boys. However, he was unsure because he could not pinpoint the evil from Epsilon, who had entered the boy's body and was now living as a parasite. Xi-Tiger took a young girl hostage and threatened to kill her unless Epsilon revealed himself. The boy flew into a rage and morphed his body into Epsilon himself. Xi seemed to sense this strange power, and in fear, killed the girl and fled. Epsilon had completely split his dual personality apart; with both good and evil Epsilons now chasing after Xi-Tiger.

Community content is available under CC-BY-SA unless otherwise noted.