Side Scrolling run and gun platformer

Silhouette Mirage is an action side scroller where the main mechanic of the game is that your attack is different depending on which direction you face. This links into the story where there are two attributes of Silhouette and Mirage and facing either way will either do damage or drain magic depending on the attribute of the enemy.

The plot revolves around Shyna Nera Shyna, the Messenger of Justice who's goal is to save the world by restoring Edo meaning she'll restore the world to its point before it was destroyed.

There are multiple endings that have two deciding factors. The first is whether Shyna beats Zohar in the time limit during their last fight and the second is whether Shyna chooses to leave or restore Edo.

If Shyna beats Zohar in the time limit, Hal will reveal that Zohar is a Guardian Angel too and was just given sentience. Hal returns Zohar back to their original form removing their free will. Shyna must then defeat Zohar's true form Cypher Za/Ha Zohar.

Choosing to save Edo after this results in a fight with Armageddon, a human who was experimented on before the world was destroyed and wants revenge. It turns out Hal and Megido are the two halves of Armageddon. Once Armageddon is defeated, the world is restored to how it was before with only Shyna surviving. Nobody can see her however.

Choosing to leave Edo causes Megido to appear and kill Hal. Shyna then fights him as well as a mutated form of him. Once he is defeated, Shyna decides to restore the world herself.

If Shyna doesn't beat Zohar in the time limit, Hal will simply kill Zohar himself as he believe's they're worthless to him. Instead he will summon Serah to fight Shyna.

Once Serah is defeated and Shyna chooses to restore Edo, Geluve will appear, killing Megido and then Hal. Once she is defeated, the restoration of Edo doesn't commence so Shyna decides to restore the world herself.

Silhouette Mirage has an overall positive score on reviews and is often stated as a hidden gem.

The Sega Saturn version is praised but it is also noted how the combat can easily be broken with spamming or button mashing. The unbalanced power-ups were also a stated issue.

The Playstation version has more divided reviews often because of the changes made to the game. Some reviewers dislike the game for how repetitive it can get when the enemies health is higher and how the items were balanced in a strange way.

The North American Playstation version is infamous for increasing the difficulty which was common from the company that translated it: Working Designs. A lot of religious references were also removed in name translations and imagery such as a cross and the shop keeper holding a cigarette were either removed or altered. Other additions to the game were dual shock controller support and memory card selection as well as a new mini-game where the player could control Zohar during the credits and a bonus game. The ending song was also dubbed and rewritten in english as well as the animated opening and endings being remastered into a higher quality. The North American version also added stills from the animated opening to the loading screens whereas they were simply black with the text 'Now Loading...' in the bottom left.

In the North American version a lot of gameplay mechanics where changed. Shop items were repriced depending on their usefulness but where also overall cheaper than the Japanese version. Shyna's spirit in the Japanese version would go down whenever she used her power-up however in the North American version her spirit would only drain with special attacks or if an enemy hit her with the same attribute that she is.

Concept art from the Guidebook shows that three bosses were never implemented into any version of Silhouette Mirage. These bosses are Hashmalim04, Nebuchadnezzar and Judas.

Hashmalim is an unused Guardian angel who would have most likely used both attributes since their design has a red and blue side. Nebuchadnezzar resembles a director so would have perhaps been a planned boss for Media City. Judas has no notes for a boss fight unlike the other two but is mentioned to be an ally of Megido.

Hashmalim04's name comes from a ranking of angel from Judaism, a theme throughout the guardian angels' original names. Judas is named after one of Jesus' disciples who betrayed him.

In the Japanese version, the shop keeper uses a dialogue portrait with a burning cross in the background as well as a portrait where they hold a cigarette, this is unseen in the North American version due to censorship. The cross is replaced by a burning dragon and the cigarette is simply replaced with the shop keeper's fist. 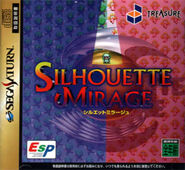 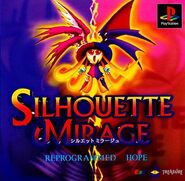 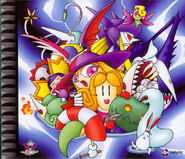 Art from the inside of the North American box 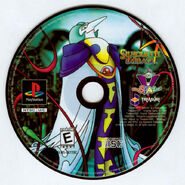 The Hal version of the North American disk 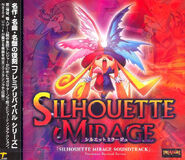