The Silvergun (Japanese: シルバーガン Shirubāgan) is a fighter ship in Radiant Silvergun.

It is the namesake of the game.

The Silvergun fighter is a Hyper Vehicle developed by the EDA. Three prototype ships were manufactured, and were undergoing their last days of testing as of July 2520 by the crew of the Tetra space cruiser.

It is comprised of a compact fuselage with a cockpit fit for one pilot. Going out the back of the fuselage is a powerful rocket-like engine with five exhaust cones; One large central one and four smaller ones. It also features four wing binders for maneuvering, along with a single tailfin.

The ship comes armed with an powerful array of seven different weapons that "level up" and become stronger from extensive use;

According to the concept art (see Gallery), the Silvergun's control systems feature two pedals, three instrument panels with avionics, and a left-hand control stick with right-hand throttle quadrant. The throttle quadrant has three colored buttons on it labeled "A" (green), "B" (yellow), and "C" (blue). These buttons are used to operate the Silvergun's advanced weapon systems.

In addition to that, the frontal cockpit hatch swivels forward in a downward angle, allowing the pilot to enter and exit the ship.

Unit 01 is the blue Silvergun prototype, piloted by Buster. It is controlled by player 1.

Unit 02 is the red Silvergun prototype, piloted by Reana. Asides from being the player 2 ship, Reana has some personal touches on it; In particular, the seating is wrapped in plastic and has a cushion with cat paws on it, along with a cat-themed headrest cushion.

Unit 03 is the yellow Silvergun prototype, piloted by Guy. It is not playable in the game, but it is seen at certain points during Saturn/Story Mode. It was eventually destroyed in a kamikaze attack when Guy sacrifices himself to stop the Stone-Like.

Asides from the three prototypes, the Penta, which is fought in Stage 4D, also has its own Silverguns, which are black in color with blue cockpit canopies and are tethered to the Stone-Like-controlled space cruiser. These Silverguns use highly enhanced variants of the original's weapon systems, even the Hyper Sword. When their attacks are exhausted, the enemy Silverguns will break from their tethers and fly at the player in a last-ditch effort with an explosive kamikaze move.

Sometime in 2008, 13/B Specter's released high-end resin model kits of Silvergun Units 01 and 02. Three professionally assembled and painted models were first showcased at the 2008 Winter Wonder Festival in late February/early March at the 13B/Specter's booth; one of Unit 01, another of Unit 02, and the third of one of Unit 04/05 (previously designated Ver. C), complete with a tether.

All three Silverguns in flight 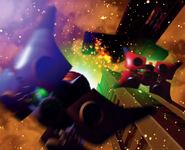 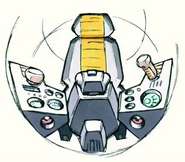 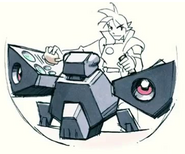 Retrieved from "https://treasure.fandom.com/wiki/Silvergun?oldid=4193"
Community content is available under CC-BY-SA unless otherwise noted.